ConsumeProduct
Communities Topics Log In Sign Up
Sign In
Hot
All Posts
Settings
Win uses cookies, which are essential for the site to function. We don't want your data, nor do we share it with anyone. I accept.
DEFAULT COMMUNITIES • All General AskWin Funny Technology Animals Sports Gaming DIY Health Positive Privacy
125 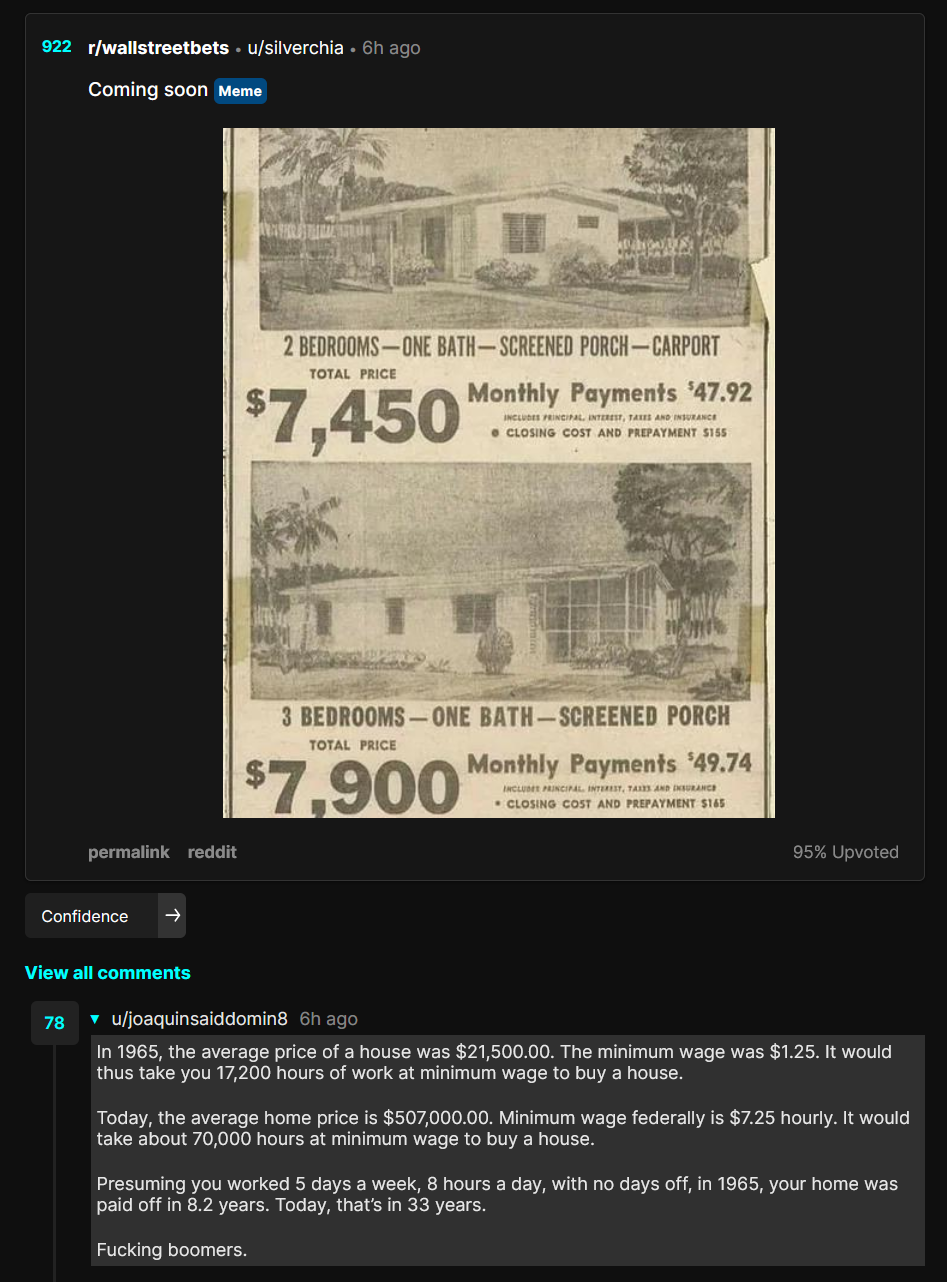 Reminder: Any system in which home prices rise fast enough to be considered a good way of building wealth will inevitably become too expensive for new generations to enter the housing market on their own.

If residential real estate is a "Good" investment, then it must necessarily be a better way of gaining wealth than working or most other investments. If that's true, then residential real estate prices rise faster than those other sources of income. If that's true, then the gap between income and home prices must increase over time. It's a mathematical inevitability.

Cool it with the anti-semitic remarks.

In general any system where interest rates are greater than real economic growth is going to lead to bloated financial assets, debt deflation and inevitably a crash. Viewing housing as an investment is where we went wrong. The only people that would lose if we socialized housing are (((investors))).

Yea socialized anything right now is a useless scam. Look at what happened with Obongocare. While moving housing out of the privatized investment sector and into the public domain is ideal, the entire system and demographics of the country need to be replaced first.

at which point socialized housing is no longer necessary.

Quite. That realization is pretty much where libertarianism crumbled for me. There are cultural prerequisites to make a libertarian system work, but if you meet those prerequisites, then pretty much any system will work. That's true of most other economic systems, as well. They're only helpful in situations where they're not viable, and only viable in situations where they're not helpful. And if that's true, then the only sensible economic platform is one devoted entirely to maintaining the culture.

No. Do you think I implied that?

Home prices rising indefinitely requires either an indefinite decrease in supply or an indefinite increase in demand. Either native, perhaps-white Americans are increasing in number so quickly that you get Wall Street returns on property -- they're not, or you're importing a shitload of brown people to breed and create demand. I mean, we know which scenario has been occurring since 1965.

Real estate as an investment is predicated on replacement.

Shitlibs are the dumbest motherfuckers on the planet.

They simultaneously bitch about house prices and also clamor for open borders and importing all of the entire third world.

Hmm, wonder why the house prices are going up /s

And then US politicians passed an Immigration Act that opened our borders, abandoned our ethnic heritage, and guaranteed the nation would crumble into a third world shithole.

Everything boomers are blamed for, jews engineered.

I don't like falling for the boomer hate meme. I know if I were in their position I'd probably have fell for the same propaganda they did. But I'd find it a lot easier to let them off the hook if they at least felt bad about the decline they oversaw. But most don't even acknowledge that the world is actually worse now.

Most boomers will actively defend the kikes and double down on what they have done to ruin Western nations just to avoid their feelings getting hurt. That's where boomers fully deserve the hate.

They know better. But they choose to live like cattle. At least young people have the excuse of being stupid.

"We got ours and fuck everyone else" is very much a boomer attitude. Hindsight is easy, and it's easy to say "well I would have done it differently". But we are product of our time. We have the Internet to sit here and become based without so much as cracking a book. Boomer ignorance, which is reasonable, doesn't excuse boomer attitudes. But it doesn't matter whether we excuse them either. They will die, likely believing what they believe now, and the rest of us will have to live on.

Exactly. The problem isn't the problems they caused, but their denials of the problem. If they'd admit the problems existed, we could take steps to fix them, but we can't because they refuse to see obvious things.

The main problem with Boomers is their acceptance of jews, because most of them benefited a lot from this dysfunctional system. Buy a house in a growing city for pennies and watch the city grow up around your neighborhood, soon you'll own one of the most expensive houses in town.

Greed is a human motivation, and I guess I'll just speak for myself and say I'm not above it. It is a great thing, though, to realize that acquisition is not the end-all of happiness and that the stuff that you own, in return, owns you. What I'd like to do is not lay blame on other people but be better than them.

The blame game goes in all directions, carefully orchestrated by the jews to prevent people from noticing (((them))). I agree, it's just as stupid to fall for the blame game.

And they allowed. So they’re to be blamed.

Exactly. A house that cheap would be a converted chicken shed. Average house is $1.2 million. Nice houses are substantially more.

Meh, I live in a poor area.

Even the poors are laughing at you. Go be poorer somewhere else. 😁

Where the fuck do you people live, San Francisco? I've got more square footage than I could ever use for under 300k and my town is more walkable than the suburbs ever were.

People who choose to live in cities don't get to talk about housing prices.

I definitely believe in voting with your feet. It does seem a shame for white, middle class people to have to abandon the very places their ancestors made decent to live.

I tried to vote with my feet once, and they threw me out.

If your main source of income is a working class job, then yes it was.

$500k is no where near normal for a primary residence house. The new developments in the ritzy upper-crust part of my metropolitan area are marketed for $300k-$400k.

Real estate is about location and the demand to live in that location. What's normal for your location is very abnormal for others. Where I was living 300 to 400 k properties practically do not exist. Empty lots are worth more. Any structure in that range would be a ramshackle hovel that would be bulldozed off the land to make room for new construction. Average single family homes are well over 1 million.

that's literally a 900 sqft shithole in almost any western city

Yes because that is actually a rare thing I would assume

This is how it supposed to be until evil greedy jew demons and their shabbos started cashing in. A man should be able to pay his vehicle off in a couple of years. Pay his home off in 7-8 years SO THAT THEN he may be able to chase all those crazy dreams, happiness and liberty and create something in this life. Now its usury and struggle and jews think its funny. we are in hell.

It's one thing to live in a house while you pay off the expense of building it. Another thing to ponder is why don't we (most people) own any land.

I can say for myself that my ancestors were immigrants to America. They never acquired such land that it could be willed to their descendants. IDK what happened to my great-grandparents land. They're the only generation that's dead. I assume my grandparents sold it. My grandparents, who own only modest homes (so 1 million dollars now lol), will die eventually, but I suppose I'll be 50. My own parents largely never saved a penny. If anything, I'll be paying to support them when they're old -- not inheriting anything. Provided I don't sell their homes, I may inherit a quarter acre when I'm 70. I have 3 siblings, so 1 home would be more than an equitable distribution.

So, sorry for the tl;dr. No birthright for me. I will own land only to the extent I save/borrow for it myself.

I think its a good comment. Many are in this same boat. My parents will leave me nothing but debt. Have an old greedy great uncle who took most of the farmlands. Don't know why the fam didn't stand against him back then. My parents were boomers who only lived in the moment and didn't give a shit about the future.

My own parents largely never saved a penny.

When anti-white propaganda takes hold, people lose all sense that they have ancestors and will be ancestors to someone else. They start living for themselves and the here and now without any regard for what was passed down to them or what they will pass down to someone else.

Blame the urbanization of America. Nobody wanted to be a boring farmer they had to do something exciting like office work.

Urbanization has fuck all to do with it.

By the age of 25. Now that sounds like a dream to most young people, many of them still live at home by 30-35 with massive debt, working their asses of in what's supposed to be a well paid job. Constantly exposed to degeneracy, bad food, meds to treat symptoms with side effects that require more meds.

Naw, you're just a loser. Winners buy their house with a sack of cash.

All surrounding expenses have also gone up

It costs a lot to build a house holy shit. That's why many opt out for a double wide trailer.

Live in the pod!

And then there's Chinada where given the painful housing costs, foreign buyers, garbage wage, and taxes, with a computer programmer wage, you still wouldn't be able to afford a house until well past 2100. And with housing prices rising faster than income there, it's literally impossible to own one in the first place. Guess they can always live in the pod and eat the bugs.

Latin America is almost all communist now except Brazil so where does one go?

Still a thing, Menards has that

not boomers. jews at the federal reserve.

Times are so much easier now. Everything is easy and in the process everyone has gotten soft.

It's worse than it's been in decades

Oh...my bad...instalation, door dash, Amazon, next day deliveries, work from home. Smartphones...Yeah....much easier today. People are becoming soft because it's so easy. Where we're these services back then? Back then those prices were substantial for that time. We look at it different looking back at it. Look at all the conveniences we have. It's way easier

Where we're these services back then?

Completely fucking irrelevant to the topic of discussion.

Back then those prices were substantial for that time.

No. The math was literally JUST done for you in the OP. Things are objectively, unquestionably, mathematically worse now.