ConsumeProduct
Communities Topics Log In Sign Up
Sign In
Hot
All Posts
Settings
Win uses cookies, which are essential for the site to function. We don't want your data, nor do we share it with anyone. I accept.
DEFAULT COMMUNITIES • All General AskWin Funny Technology Animals Sports Gaming DIY Health Positive Privacy
67 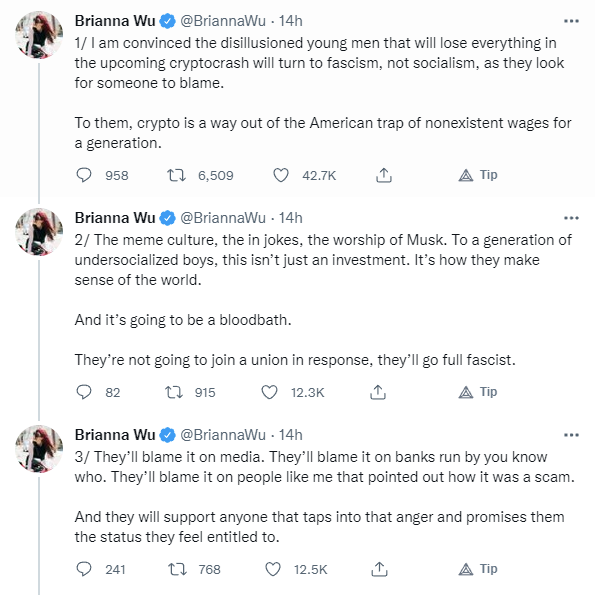 "They'll blame it on banks run by you know who" Is this faggot tranny really just gonna walk away from the fact they subtly admitted to the kikes running the banks???

My favorite part was the Jewish slide of his rhetoric here, where he points out the problem but never talks about why it's a problem.

That's the problem. Nowhere in this tripe is it even suggested that we should ask: "Why are there so many disillusioned young men?"

Instead we get: "Yeah, that group is a problem. They're looking for the wrong solution, and that's going to make them a bigger problem." Nothing about how young men are valuable and important parts of a society, or that this phenomenon together with their predicament is something we should all be concerned about.

Not: "Let's figure out a better way for our social order to include young men. "

Just: "There's no option, no way out, no recourse for young men, and we don't care."

Bitch, let's talk about necessary and sufficient conditions. What is going on in a society that causes all of its young men to be in this situation!? That's the question that should be asked, because your solution (to avoid crypto investing) doesn't even begin to address what you speak sideways about: the underlying cause that makes men favor fascism. It's like the male perspective literally doesn't even figure into this worldview; it doesn't exist.

Instead, he wants to imply there is only one option for men not to be dangerous fascists: bow down and prostrate yourself before the Communistic Feminist Trans machine, serve the unprincipled matriarchy like a worker bee, and don't try to escape.

EDIT: thanks @GrotthussMechanism, Wu is not a Chinese woman, but a white male tranny

A tranny that should be forcibly strung up

I always hate when some twitter or Reddit faggot tries psychoanalyzing an entire group of people like they’re a bunch of infants. Fuck off you tranny faggot.

They get off on feeling morally and intellectually superior. They pretend they're some intellectual who can psychoanalyze their morally inferior, bigoted opponents, when really they're just midwits pretending they're something they're not, that is an intelligent person.

Nice projection, but entitlement is how ghouls like you gain status. Hardwork is how we earn it, for some reason this was taken from us and I think Mr. Wu, on some level, understands this - and that we're likely to get fed up.

Why do liberals hate crypto so much?

Real reason: Because it bypasses the Federal Reserve Note, of course.

das rite, printing up this innanet money on vidya cards gonna fix everything

Because they probably own it and know they’re being repulsive?

"Brianna Wu" was born "John Walker Flynt", then adopted by a couple of millionaires and lived a privileged life as a rich white boy, and eventually got a sex change so he could join the SJW cult.

That tranny is probably afraid of real crypto currency and though not stupid, is a Leftist.

Tranny "Brianna Wu" has a Jew vibe to me and NEEDS THE OVEN :

I’d prefer you hit her with a heavy stick actually. Anywhere 500 meters from potable water is fine.

That's no woman. It's a tranny / troon who got a gook to "marry" it to get the last name.

I looked at it, and it resembles a version of John Denver when he was younger, and had a bulldog savaging its face.

Are you going to start stacking silver, honey, salt and organic seeds now that Crypto is crashing?

I should get more honey. .. and bullets, yes!

My liberal anti-gun neighbors do all the stockpiling for me.

Except screw silver. It is as useless as crypto in a crisis. Nobody will barter their stuff in exchange for shiny rock. Everything else you nailed.

Silver and gold aren't for the crash. They're for the recovery.

I'm stocking up on dried milk and olive oil as well. This is mostly for inflation protection. I already have all the rice and beans I could ever eat. barf

I'm going to see if I can stock up on oils of various sorts, as well as plants that make oils, that way I can make lots of biodiesel.

I hope this deranged troon (redundant, I know) is forcibly detroonsitioned once we seize power.

“Banks run by you know who”

Tell us Wu, who runs the banks?

Blockchain proof of work is fundamentally a sound algorithm. It was designed to decentralize the establishment of trust, and the damn thing decentralizes the establishment of trust. I'll support that claim in a moment. Trust is really expensive to establish and being able to get it without a middleman is always going to be worth more than the cost of the energy of the CPU cycles. Leftists who think the world owes them trust because they're the oppression-stoppers are often the same people who fail to understand this inevitability. Anything that genuinely facilitates trust has enduring value.

Usual disclaimers apply. Bitcoin is not anonymous. Cash isn't an investment, even digital cash. Own something you can control in the real world. Have a way to get food that doesn't need an Internet connection.

The market may cool as the technology stabilizes and speculation dies down. Prices will still fluctuate. Most of the no-name pre-mint cryptocurrencies that you hear about mooning on a podcasts are scams. The big established ones, at least Bitcoin and Ethereum, aren't. Monero isn't.

Ethereum is transitioning to proof of stake. I think the jury's still out on that. Proof of work works because it requires an actual, real world sacrifice--the energy that has to be burned to make your CPU search the hash space--and that sacrifice is substantive because the energy required is substantial.

That's literally the mechanism that establishes the trust, by the way. People love to overcomplicate the Bitcoin algorithm but at the end of the day all it's doing is ensuring that enough oil needs to to be combusted to consider a transaction "trusted" so that defrauding the network for more than an hour or so would require more oil than even a powerful government could reasonably afford to burn. That's why it requires you to wait one hour to start to trust your transactions. That's all it does; it's stupid simple. Nobody ever explained it to me that way when I first started trying to understand it and I wish someone had.

Fascism is necessary. Embrace it on your own now and avoid late fees, because there's not going to be a cryptocrash, at least not of the kind she's talking about.

What’s suspicious is that the dollar is losing value every day, but Crypto doesn’t go up by comparison.

It is one of the manipulated financial instruments that we Fellow Whites abuse to keep the shell game alive, which means it is not a safe investment.

With AMC and GameStop, they’ve already proven how much they can and will distort the system of trust to keep each other afloat, despite blatantly exposing how much of a scam all this usurious rubbish is.

Didn't know that lying whore was still around, let alone trying to be relevant.

At this point, I don't care what system you are proposing. If it is white, smashes communism, leaves me alone, allows me to work and live a good, fair life...I'll take it.

The jew always tells you he’s hated but never why.

Yeah the chimp buying crypto virgins are going to rise up. Bullshit.