ConsumeProduct
Communities Topics Log In Sign Up
Sign In
Hot
All Posts
Settings
Win uses cookies, which are essential for the site to function. We don't want your data, nor do we share it with anyone. I accept.
DEFAULT COMMUNITIES • All General AskWin Funny Technology Animals Sports Gaming DIY Health Positive Privacy
124 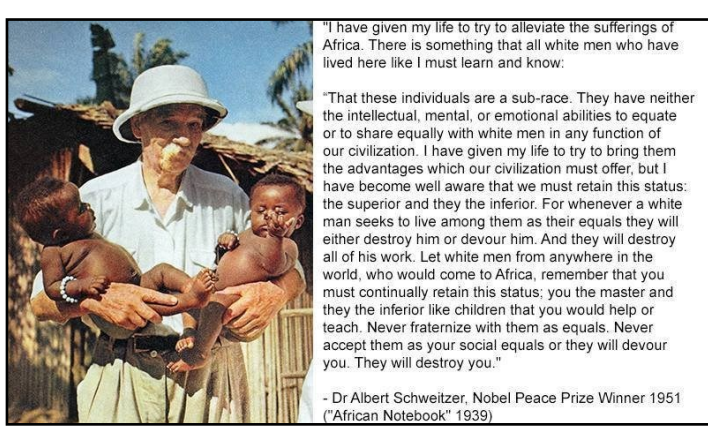 Sadly, in my 15 minutes of search research , I could not find the exact passage, but I know it is probably a fully valid quote, from memories of many hunts for sources of quoted excerpts.

Bears, wolves and gorillas are all considered by mainstream science to be separate species, yet they do not apply this "species" logic to humans, despite clear evidence that the African is NOT a modern human.

Sadly, I predict they will revise the word "species" and demote wolves, demote gorillas, and demote bears, to preserve Negroes feelings, even though it still requires every book to be rewritten that uses wolves, bear, or gorillas, or mentions the definition of "species". Negroes feelings must be preserved.

As when the definition of a "planet" was all agreed on , then evidence came out that Pluto broke the rules AGREED ON for "planet", there was a "messy situation" where every 2nd grade school book on earth for kids as well as every text book, had to be re-printed and suddenly omit Pluto as a planet!

PLUTO WAS NEVER A PLANET, due to science definitions made earlier for the word "PLANET"

NEGROES are a different hominid species than all other existing humans on earth!

NEGROES WERE NEVER the same species as humans, due to science definitions made earlier for the word "SPECIES"

I am not talking about SUBSPECIES, and am being literal, and using the word "SPECIES"

We know this from DNA. DNA does not lie. The definition of same-species in 2022 and recent years is two factors :

We try to genetically force two animals to breed a viable fertile offspring, and they cannot, then is is called A DIFFERENT SPECIES. But to be same species other criteria also is relevant.

If scientists can get two organisms to produce a viable fertile organism, it is NOT the same species if the animals' DNA drifted over 120,000 years of proven separation : (Bear SPECIES, Gorilla SPECIES, Wolf SPECIES).

Gorilla SPECIES (species not subspecies) can breed and produce viable fertile offspring. Yet their DNA is probably drifted over 120,000 years.

Bear SPECIES (species not subspecies) can breed and produce viable fertile offspring. Yet their DNA is probably drifted over 120,000 years.

The Gray wolf, Red wolf and Ethiopian wolf SPECIES (species not subspecies) can breed and produce viable fertile offspring. Yet their DNA is probably drifted less than 120,000 years (100,000 for Ethiopian Wolf) : http://wolffacts.org/ethiopian-wolf-facts.html

Animals that drifted far more than the ridiculous 350,000 year separation from Negros and true humans, can interbreed too. It is uncommon but possible. In these other mammals many fetuses die and are absorbed, but occasionally you can get live births by breeding countless mammals against each other, even with different numbers of chromosomes. :

Here Are 18 Amazing Animal Hybrids You Won’t Believe Exist But Are Completely Real:

ASTOUNDING! Look at those!

I show those in that link to demonstrate that animal life forms can be forced to mate with each other in hilarious ways, and some produce fertile offspring, but DNA age drift is used as the definition of species.

So yes, you can mate a true human (Homo Sapiens sapiens, with Neanderthal IQ gene admixture)... with a Hominid such as the major negro ethnicities in Africa (whom lack even a speck of Neanderthal DNA) :

All those Negroid hominids can be bred with true humans, and produce fertile offspring, but that does not make those 350,000 year divergent subspecies the same as true modern Humans.

The "fertile offspring, disregarding DNA evidence" is the OLD definition, that is why we have Bear, Gorilla, and Wolf SPECIES (not subspecies, but actual SPECIES), because their DNA drifted over 120,000 years.

Blacks predate by hundreds of thousands of years, the relatively recent emergence of true humans in Europe, and far far far before Humans picked up IQ genes from Neanderthals. Pure blacks lack any Neanderthal DNA!

ALL true humans (non african negroes) have some intermixed Neanderthal DNA, adding many brain boosting IQ genes, All humans everywhere on earth have these very recent genes except pure negros.

Neanderthal genes (lacking only in Negros) contributes much of the known 538 genes for higher IQ.

538 genes that are thought to be linked to intelligence (by comparing 300,000 test subjects) :

Of the 538 genes for above 100 IQ intelligence, which can 80% predict your IQ, west african Negroes and Australian aborigines LACK most of the smart genes!

Except for negroes, in latest studies of massive DNA databases, all humans (Homo sapiens sapiens) alive have 1% to 2.9% Neanderthal DNA on average per nation.

All Whites ALSO have lots of proven Cro-Magnon DNA too!:

And the SMARTEST asians bred at two points in history with DENISOVIANS, for more IQ, while the water-niggers and Thais only interbred one time.

Sadly, the percentage of Neanderthal DNA in modern black humans is zero !!! (they interbred 300,000 to 185,000 years ago with a ape-like hominid, probably a version of Homo erectus and Homo heidelbergensis branches):

A00a-L1149 (or A00a1) Y DNA is 350,000 years old in many Negroes. Negroes DO NOT have common ancestor human Y DNA nicknamed "Y-chromosomal Adam" but they keep changing the definition every 5 years, to not demean Negroes :

US Gov scientists agree that some Negroes discovered to be non-human, and Negroes interbred with ape-like creatures long long ago :

Shocking quotes from PMC4947341 "Hominin interbreeding and the evolution of human variation":

one-fifth of the Neanderthal genome may lurk within modern humans... (but totally absent in Negroes)

SUBHUMAN! interbreeding between Sub-Saharan Africans and an as-yet-unknown hominin, such as Homo erectus...

Its been known since 1874 that Blacks are NOT human, and lots of data to prove it.

Homo erectus went extinct only 50,000 years ago (100,000 tops) and was provably low IQ and PROVEN LAZY, similar to current Blacks, but unknown how much DNA admixture of Homo erectus is in the modern negro, if any, due to heat damage of artifact DNA, Negroes diverged from all real humans 350,000 years ago, as proven and mentioned frequently already (current Negro Y-DNA A00a-L1149).

NOT JUST LAZY hominids, but LOW IQ, lazy Blacks never invented any crops, domesticated animals, or even the WHEEL!

Even though Blacks are now proven from over 350,000 years ago, vs real Humans nowadays, There were MANY types of Hominids that looked like humans, right up until each were killed off and replaced by Modern Humans.

No matter how you organize the timeline, DNA does not lie. Blacks separated from all real humans 350,000 years ago.

TL;DR: Negroes are not HUMAN species! Today only DNA drift is used to differentiate species in animals, not sexual reproducing offspring of mating events, due to mammals being able to sometimes breed even with mismatched chromosomes.

Damn, what a read.

How do you guys put these things together, lol?

They really are more enjoyable when found in the wild.

Seems legit. I think most people agree with the idea that nigs are a lesser race. Hell, most libtard laws are based on that very fact

Yet Watson was cancel cultured and had to sell his Nobel.

My Christian friends will love this! Just like Martin Luther's "the jews and their lies."

It's crazy how people only quote the stuff they saw on a poster, never checking into who the person really was or what they really said.

Where do you find such Christian friends? My Christian friends tell me, "Yeah I know the statistics, but statistics and DNA doesn't mean shit to God, black people are God's creation too and we must love them as equal and never look down on them!"

I meant it sarcastically lol all my Christian friends and family are pussies.