ConsumeProduct
Communities Topics Log In Sign Up
Sign In
Hot
All Posts
Settings
Win uses cookies, which are essential for the site to function. We don't want your data, nor do we share it with anyone. I accept.
DEFAULT COMMUNITIES • All General AskWin Funny Technology Animals Sports Gaming DIY Health Positive Privacy
186 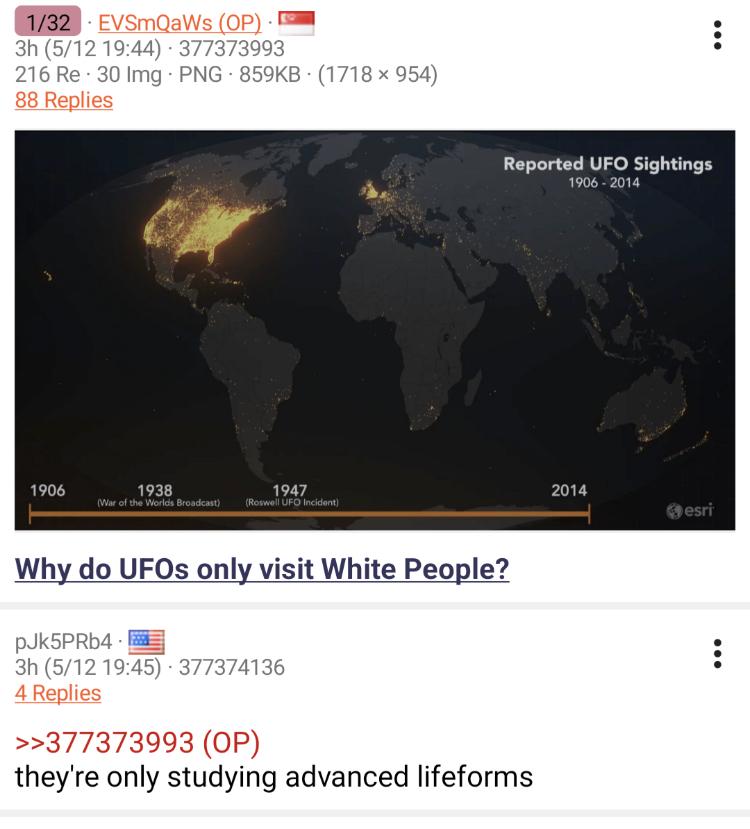 Blacks too busy looking for the Leprechaun

Then go on a killing spree to present a gift of raw meat to the aliens.

They probably start worshiping them and form cargo cults.

Bingo. My first thought went to how the data was collected and, in each nation, what infrastructure exists for studying and archiving historical UFO data. That, together with how cooperative (or uncooperative) those institutions would be with independent inquiries. There are a lot of factors that might contribute to why some areas on this map are 'dark'.

For one, does the region have a commensurable UFO concept? As you say, primitive people might not conceive of weird sky phenomena as having technological causes. Maybe you ask some African tribal leader whether they see UFOs. He says, "What?". Suddenly your interpreter understands and says to the chieftain, "Sky fire. He's asking whether you see the sky fires."

Second, does the culture in an area support the kind of UFO culture and conspiracy that the west does? If not, then you might have a lot of individual biases against not only interpreting things as UFO events, but even stronger biases against making big deals out of their experiences. I've seen things that struck me like what a UFO experience would be like...but do I really KNOW what a UFO experience even is? That's the trouble here. It takes a culture that's UFO-fanatic for the US to be 'lighted up' like it is on this map.

Lastly, even if a region does have a UFO concept, and the culture supports a continuous UFO inclination, there may simply be a lack of organizations - either governmental or independent - for handling and preserving historical data about UFO sightings. Again, even if there are such projects, they may be covert or uncooperative with someone trying to gather this kind of data.

The original map is about the distribution of the English language, not about reported UFO sightings

Is OP being a fag?

Right and there is no English language In Australia, Quebec, South Africa, or New Zealand?

Guys I think we have more than just Feds on our board, we got the Ayy Lmaos too.

You motherfucking retard, I could ask the same thing, are there no white people in Spain, Poland, Italy, Portugal, Russia and so on and so forth?

Here's a map of Australia that MATCHES the one OP posted

Here's another showing the same for Quebec

And another for South africa

See, the areas not lit up in OP's map, don't have ANY or close to no people living in them, hence there's not gonna be any english spoken there. But if you look closely, you'll find the areas they reside are lit up. You just had to do a little bit of thinking, advanced lifeform.

AU is pretty much only significantly inhabited at all on that coastal strip.

If the original map was about English distribution, more places would be lit up, faggot.

No, no there wouldn't

It’s just a 4chan post not meant to be taken seriously. I didn’t research the map, just saw this and thought it was funny. Aliens aren’t real anyways

Probably some sort of stealth aircraft.

The alien myths around Area 51 are likely a cover for experimental aircraft testing.

If theyre hiding aliens anywhere, its both in plain sight and in a location no one knows anything about.

Did you tell anyone about it? Please share more

Oh, wow. That could have been an aircraft, and it could have been something else entirely. The US military does operate several heavier-than-air aircraft larger than football fields and has in the past, and the size and proportions you are describing could be consistent with a large stealthy transonic airship of all things.

Space aliens are breeding with humans, university instructor says. Is sus cuz doesn't say what religion the humans are.

for the love of God those nazi UFOs better be real

Only a retard believes in aliens.

He thinks space is fake and earth is a flat. He is self projecting his retardation