ConsumeProduct
Communities Topics Log In Sign Up
Sign In
Hot
All Posts
Settings
Win uses cookies, which are essential for the site to function. We don't want your data, nor do we share it with anyone. I accept.
DEFAULT COMMUNITIES • All General AskWin Funny Technology Animals Sports Gaming DIY Health Positive Privacy
293 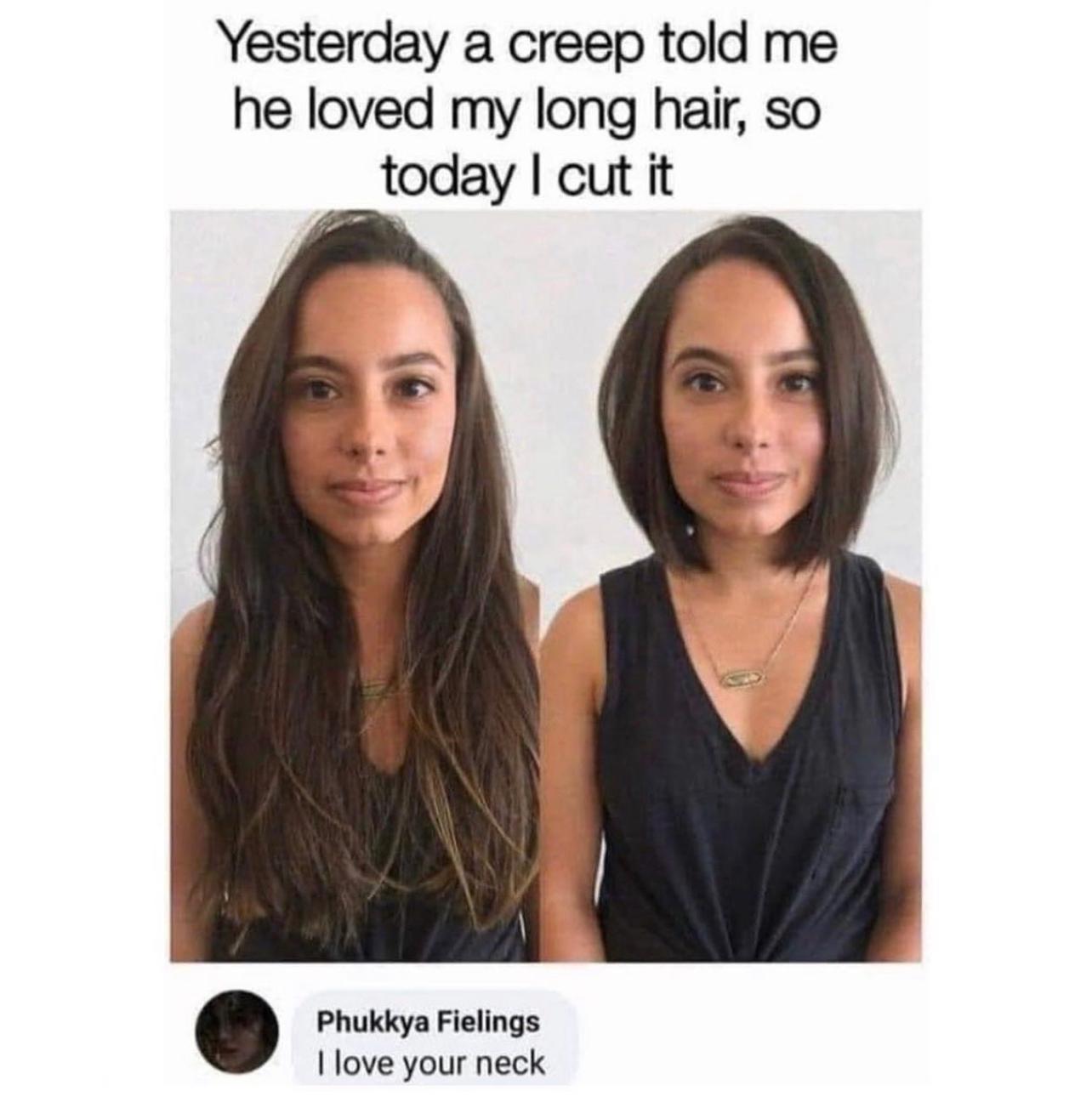 not just any man, goy

When a woman calls someone a creep it’s because they don’t have any argument against them. It means nothing other than “unattractive male I don’t like.”

women shouldn’t be taken seriously. Ever.

??? where is this coming from lmfao

A creep is someone who feels anxious acknowledging a woman's attractiveness or sexuality. It's repulsive to be of two minds like that, "I want to but I shouldn't".

Because women are objects that think they're observers, they feel the man's anxiety and correctly identify that feeling as coming from the man. They blame the man for causing them anxiety instead of sympathizing with the fact that he's nervous about being attracted to them.

A good looking guy can be a creep, and a bad looking guy doesn't have to be. Just be confident in your opinions, and unapologetic.

Makes sense. When they can't cut it anymore they start dying it bright colors.

I know a bipolar chick who always does this. Whenever she has some kind of manic episode, the first thing she does is chop off all her hair. Then she dyes it. Has dyed her hair so many times that she will dye it even if going back to her natural color. I've always assumed this is tied to some crisis of self image, but never bothered unraveling the spaghetti mess of women's emotions to understand why.

Yeah, it doesnt matter and would be a waste of time trying to understand it.

You're dead on. I've seen this play out so many times. Women with short hair are nutters.

Yep, most of the time you can tell the extent of how crazy a woman is by how long (or rather not) her hair is.

They cut their hair short when they stop caring about being attractive to men. It takes less work to maintain, so they cut because they don't care how it looks.

You just reminded me of a tip I once heard. It was something like "If a married woman cuts her hair short that's a sign that the marriage is about to fall apart." I don't remember how it was phrased exactly, but it was that drastic.

It didn't happen. She wanted to try out a new hairstyle, but was worried it might not turn out good, so she prepared this story so that she was "successful" whether it turned out good or bad.

This example isn't self destructive like many feminists, as is evident by the fact that she still looks good and feminine.

But in the cases where feminists do self destruct and grow out their armpit hair and shave their heads or whatever, that's also not to "stick it to the man." They do that because they are so self conscious and convinced themselves they don't look good (whether they do or don't. With most feminists, they originally did look good. But with like ugly men who go "transgender," it's because they were always actually ugly), so they destroy themselves so that being "ugly" is a conscious choice and it's society's fault.

She is still going bald probably bcs of long term contraceptive use.

Guaranteed she'll turn this into a story about a man bullying her to cut her hair.

Fivehead. Not as hot as she thinks she is

More like Michael Obama and Kamala Harris had a baby.

What's with this gay skull emoji?

Its nigger speak for "im dead"

You should be dead

We'll all be dead soon enough.

I’m convinced u/RomanCommander is in the 8th grade

LOL. A few bitches recently kept using it now i get it.

I'd wager she had planned to cut them regardless, but just wanted to make shit up and proclaim that random people compliment her and that she gets attention. Also, the before/after photo is for her follower simps to argue about whether they agree with the supposed creep or not.

Women are pretty good at manipulation. What I don't get is that a man gets totally manipulated by a woman then she will see her man as below her, the opposite is also true too. Women leave men they can't control

I think she just wanted to try out a new hairstyle, but was concerned it wouldn't turn out right, so she wanted to have an excuse to tell people who ask why she made a bad decision.

Wow, you sure showed that random stranger that you will probably never see ever again.

"I love your nose"

HA I cut off my nose to spite my face TAKE THAT, CREEPS

"Yesterday I decided I wanted to try out a new hairstyle, but I wasn't sure how it would look and people would react, so I prepared a story as an excuse to shield my own decision."

Not white so don't care

You think she’s a negress? Lol

yeah and the lighting is making her look darker too.

Appears to have the taint of the tar brush.

The shorter the hair the less a woman looks like an actual woman, but rather like a man

It depends because some look cute and some looks like a dyke.

That’s not short hair, it’s short when they start looking like little boys.

it's just the tip short hair

i don't need a woman to be "cute". Cute is for little girls

Just the tip, I promise

That's a weird way to say "I am easily manipulated by men."

She still looks good, she should shave it all off.

Your brain is literally filled with coom, faggot.

He's a coomer but he's right.

Facts, she has DSL.

DSLs is more a morphology descriptor than anything else. I've used it against plenty of people I'd never want to have suck my dick.

it's a good insult for using on guys

Such a gay insult lol

Not after she empties my balls in her throat.

I can't stand women with that kind of nose. The nose with the two very defined left and right sides with the divot in the middle.

Fake and gay. This didn’t happen.

The rules of communist women wanting attention are as follows.

What do these communist women do to get that man they find attractive?

In my experience they often fall in lockstep and become right wing if he gives them the time of day.

Ironic. These types want to be strong and independent yet conforms to men they percieves as attractive and dominant.

Every woman wants to be dominated in one way or another. It's innate imo. They won't admit it to themselves as masters of cognitive dissonance, but it rings true despite all this.

It's not a conscious thing, they do it without realizing because it's in their nature. When they're self-aware enough to know what is happening, they have random outbursts, like a dying horse throwing its last few kicks, trying to run from/fight the inevitable.

like a dying horse throwing its last few kicks, trying to run from/fight the inevitable.

Ever tried typing on a running tractor?

You fixed the typo two hours ago, why are you replying now?

Besides it's not a big deal, was simply calling attention to it, boomer

Because that's when I read it, zoomer.

They don’t get a relationship from those men, only sex.

So they see a great looking guy, but most good looking guys are no different than average or low looking guys in terms of sex drive, and is like “free pussy? Sure I’ll hit it!” so he does, whether it’s once or for a short while, but when communist woman becomes unbearable, he quits it because a good looking or highly sought after man has options.

Communist woman then repeats this many several times because she can (I mean if you could date 10s all day wouldn’t we all?) not realizing men and women value different things in a relationship partner (men want a wife who is feminine, loyal, not masculine, etc) and begins to think men are assholes as her body count rises and she’s no closer to a husband.

Communist woman then begins to lie to herself that she’s happy being single, men are scum, etc. but continues to sleep around like a whore because she’s still subconsciously looking for a man to wife her and care for her and provision for her.

Then as communist woman ages, IF she is able to keep her looks decent, begins to get desperate and then settles for the beta men she doesn’t find attractive to exploit and/or divorce rape for resources to protect her future, while maintaining a high probability of cheating if the right guy comes along on her DMs as she will continue to advertise her body on Instagram long into a “relationship” and blame any man who has a problem with this as “controlling” so the beta men she fleece will shut up and take it because they are weak and desperate for sex.

If she can’t remain attractive, she will devote herself to a feminist cause to destroy society for its “crime” of not allowing her to be a slut and get away with it without consequences, and she’ll die alone with a cat, and/or a lesbian, and bitter.

absolutely turbogigabased. Only problem is you insist on the communist thing, most women are like that now.

Most women are communists.

That’s probably true, I just used the communist label to ensure people know I’m not talking about all women, and there are women that understand the value they bring and seek. But your right it’s easily most.

what do you mean? They exist, shouldn't that be enough?

but the guy was a "creep" meaning he wasnt attractive. But she still mentioned the attention he gave to her.

Women are literally coming to hate the affection of men, which they should in fact love.

I love how she wants to have equal rights to a man.

"OMG now I want to be barefoot and pregnant in the kitchen!"

My hair is longer than hers now and I am a man. I win!

I got long hair though I hide it in a hat at work.

What is wrong with long flowing hair?

ignoring the crazy cunt, is it just me who finds that length of hair gross? Like either leave it long or cut it a bit shorter is my idea, don't half ass it

I wish my life was this easy

I love the worms under your skin.

This is from TFM, by the way.

Someone was noce to me so i damaged myself to spite them.

What an absolute fucking degenerate. How insecure you have to be to change you appearance after one retard said one thing to you?