ConsumeProduct
Communities Topics Log In Sign Up
Sign In
Hot
All Posts
Settings
Win uses cookies, which are essential for the site to function. We don't want your data, nor do we share it with anyone. I accept.
DEFAULT COMMUNITIES • All General AskWin Funny Technology Animals Sports Gaming DIY Health Positive Privacy
236 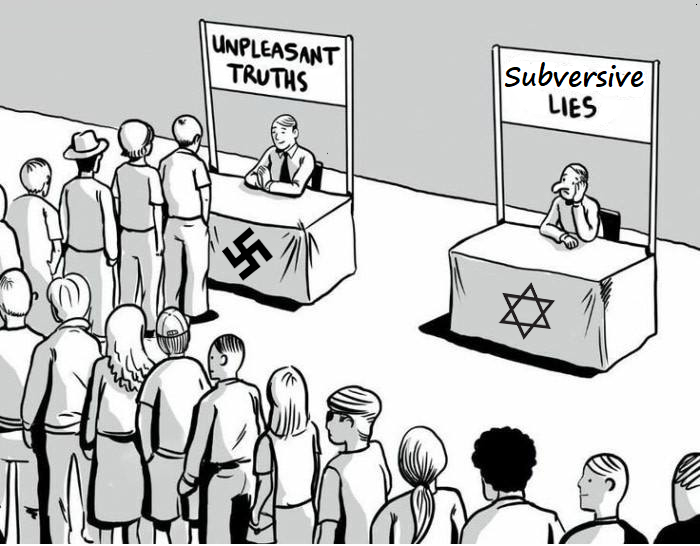 Where is the lineup of naive Patriot.win users at the subversive booth?

Just cross out subversive lies and crayon in "Israel is our greatest ally."

They are still stuck at the sean hannity booth learning about how great muh rank and file fbi agents are.

Which is ironic because I seem to remember Hannity writing a book about how the fbi was weaponized against Nixon.

OOHH NO, I WAS CALLED A STORM-CUCK!!! How will I live from now on? Might as well just go back to reddit and facebook and embrace globohomo!

they all use it, or "stormfag", its like they all sit in the same wing of their office and talk to each other.

It would be fair to be called a stormcuck if I advocated or praised violence against them.

I never do, I just point it out. I just notice it and make you notice it too.

Hitler was still a bad guy.

He could have did better.

By the same standards that Hitler is claimed to be "bad", one could argue that most of the Allied leaders were also "bad". For example, America under FDR built concentration/labor camps for its Asian population, where many starved to death or were worked to death. And Russia under Stalin was running gulags for its own dissidents before, during, and after the war. Same comparison can be made for things like censoring negative news reports and cracking down on political dissidents, those were certainly not exclusive to Nazi Germany as some like to claim.

But the winners write the history books. So you get lots of documentaries and reports about the German concentration camps, and in many cases it has been proven that German atrocities were exaggerated or simply made up for shock value and political gain. But nary a word about the atrocities in America's camps. And the Russian atrocities are only discussed in the context of the Cold War, and not in the context of them being an American ally in WW2.

Hitler was not perfect and there are legitimate political and economic reasons to debate his success as a leader. But his total demonization in the modern West has no moral or logical leg to stand on, since the same nations that shit on Hitler will defend their own leaders of the same era, who did the same things he did, or worse.

Have your considered that nazi larping is just really damn cringy?

What the fuck is your username you nigger

i kill jews for fun

Yea, we tell some of the fellow members this. They're 14 year olds, so they know better than you or me.

the fuck am i reading?

The ramblings of a schizo

and i thought i was schizo

Same, the guy who visits me in the night, 2 heads, 3 faces, he whispers in my ear. He told me that I'm crazy. I didn't believe him but the people who look in my window did.

You are kind of coming across as a nut bag. Calmly explain it at at least a high school level, this isn't reddit.

"complimenting" some anons on a gardening and basket weaving forum

How old are you?

It was either that or gender studies

You are out here to label everbody. Stop schizoposting. Get a job and lurk two moar years, or reach the age of 25.

NEETbucks is not a pension.

English mother fucker...do you speak it?!?

Alright go live in your echo chamber but just so you know, most people arent nazis

Most people don't know the nazis were right.

That's changing, though. According to a post I saw here the other day ... a full one-third of people surveyed think that the wrong side won WW2.

Not right about economics, genetics, social policy, diplomacy.... yeah what exactly were they correct about?

They were correct about economics, genetics, social policy, diplomacy...

So why dont they exist anymore?

Well if they were so good in every aspect, how come they lost?

Incorrect, 80% of all nazis are people

The other 20% is hermann goering

I got you fast boy. Have you been liking my history lessons? u/#ted

You are quite a weird one. Not sure if just controversial opinions or actively subversive.

His strat is basically just an advanced version of poisoning the well.

He'll mix in obviously crazy bullshit with things that are otherwise true in order to sow discord and make people question the community itself.

It reminds me of a guy a few years ago who presented himself as a CIA whistleblower, said some good stuff, then all of a sudden hosted a press conference and claimed the US had bases on Mars and were hosting child sacrifices there.

claimed the US had bases on Mars and were hosting child sacrifices there.

where is the lie?

Not sure if just controversial opinions or actively subversive.

Antonio is that you?

Imp1's alt is in this thread somewhere. My money is on shinichi.

🤔 I think you've convinced me.