ConsumeProduct
Communities Topics Log In Sign Up
Sign In
Hot
All Posts
Settings
Win uses cookies, which are essential for the site to function. We don't want your data, nor do we share it with anyone. I accept.
DEFAULT COMMUNITIES • All General AskWin Funny Technology Animals Sports Gaming DIY Health Positive Privacy
111 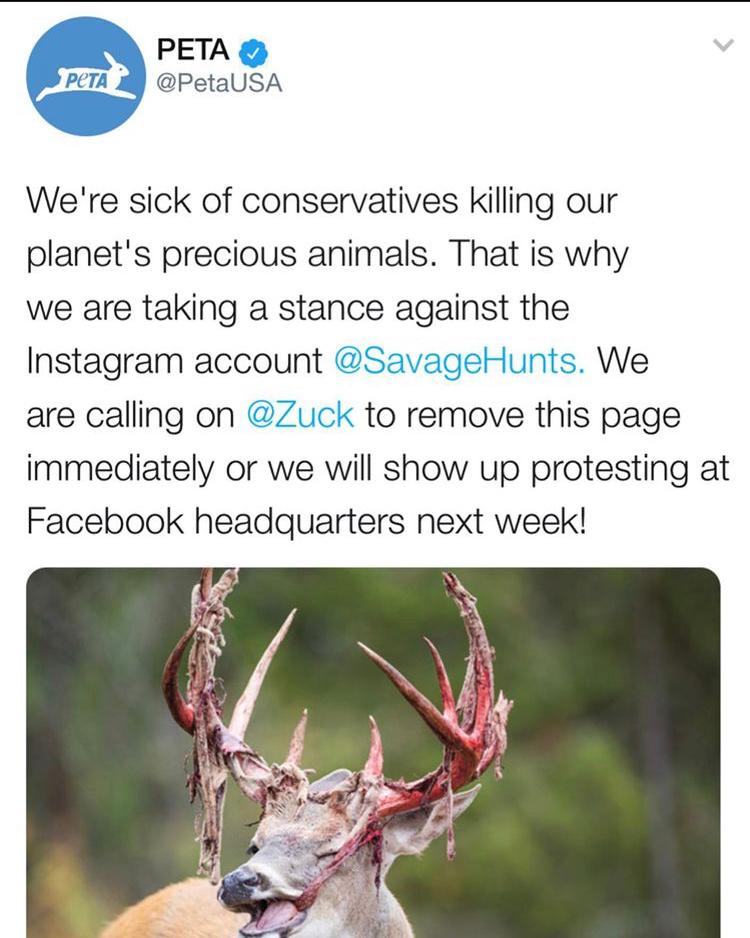 They rub their antlers against bark, it’s actually been proven to be very relieving to them

I knew that, I meant PETA killing animals.

They execute pets on a massive scale, they own kill shelters and I think at one point they payed people to give them pets which they executed.Not to mention they are borderline domestic terrorists and not the good kind.

As most groups of such political activism, they seem to predominantly attract the mentally ill.

They also went around kidnapping dogs with collars off of people's porches and "euthananizing" them same day.

IIRC they also literally kidnapped peoples' pets to take them to their kill shelters.

They'll take animals in as a "shelter" then immediately euthanize them.

I've heard stories of ill informed people who couldn't cope with their pets taking them to PETA, only to phone up a few days later to see how their former pet was doing, and being told they got euthanized the same day they were brought in.

The PETA building has a fucking basement freezer for dead animals.

The crazy MFs think it's better for the animal to simply die than being "subjected" to another "slave owner" again.

They don't believe companion animals should exist but front as a shelter. They euthanize them all

Yeah, they aren't totally wrong on assuming domesticated animals cannot survive without humans, and animals born into captivity are at a disadvantage in the wild, but they cull these examples whenever they get a chance.

Say they were a necessary evil organization that was quiet and just euthanized animals when absolutely necessary it wouldn’t be such a big deal but they act so pathetic and morally superior all the time it’s infuriating.

One of the earliest propaganda videos of theirs I was shown was of dead cows being ground up whole in a machine. I pointed out that dead cows don't "moo" and was attacked for appearing insensitive. Thinking back, I was surprised people would willfully reject the truth.

isnt that picture just displaying the natural mottling process? Or am i missing something

Looks like it was fighting another male over a mate. Has nothing to do with hunting.

No, it’s what the first guy said.

PETA are being subversive again.

How could they not get a single picture of someone killing a deer? It's like they are doing it on purpose..

Because they are a bunch of Jews. Jews aren't going to get up at 4am, hike out into the cold woods, and wait around all day to snap a picture of a hunter bagging a deer. Plus the hunter would have to allow them to tag along. Pretty sure he's gonna figure out shlomo Is up to no good before they make it to the deer stand.

It's because all the "educated" retards have no basic knowledge about stuff like this. Those are the kinds of retards who find lost "turtles" and introduce them back to the water only to be inform that it wasn't a turtle it was a fucking tortoise.

They'll take it at face value.

No fight. Natural shedding of the skin off the antlers. It looks brutal thou.

New set of antlers every year, they grow in the spring and in late summer they will rub off the "velvet", stops the growth and allows the antlers to harden so they can throw down with other deer chads for the right to impreg the best trad-deer wife.

Conservatives are the ones being hunted

They're taking advantage of the fact that your average twitter user has no idea how deer anatomy works.

yep, my first thought too, they are clearly trying to imply that hunters are going around fucking with elk and deer and "maiming" them without killing them or something by using that picture and city slicking faggot retards will lap it up

I don't know Rhino anatomy but I know that the horn isn't a living organ.

Is PETA stating that animals killing other animals means the animal doing the killing is conservative?

I knew I liked lions and tigers for a reason.

PETA: 98% of the saved animals are slaughter.

Why are they using a natural shedding of the antlers as cruelty pictures?

Funny thing about peta leadership that will surprise no one here

Also dear will just starve to death with no hunting.