ConsumeProduct
Communities Topics Log In Sign Up
Sign In
Hot
All Posts
Settings
Win uses cookies, which are essential for the site to function. We don't want your data, nor do we share it with anyone. I accept.
DEFAULT COMMUNITIES • All General AskWin Funny Technology Animals Sports Gaming DIY Health Positive Privacy
138 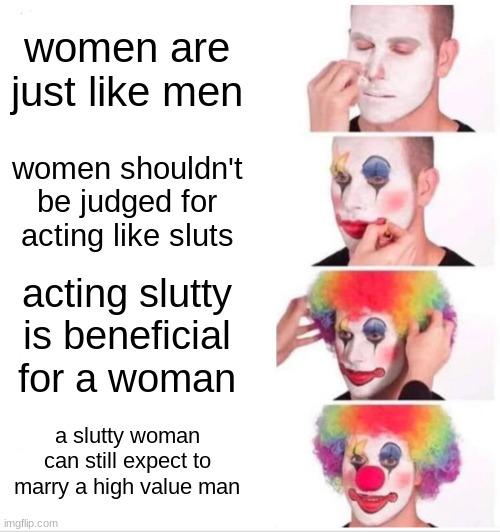 If I wanted a roast beef sandwich, I’d eat at Arby’s

Why is it that when they bring up a past double standard, instead of thinking men should be penalized for being degenerate they want to lower the standards for everyone

That's what they do with the public school system in my country.

In my country, around 50% of students go to university after school and they still think they're special and intellectuals for it.

Your education system will go the way of America's. Too many people going to college who absolutely shouldn't be, driving up costs and driving down quality. The Communist subjugation via planted professors is just the icing on the rancid cake

At least you can homeschool your children. In my country, that's completely illegal. If you don't send you children to school, they come and force them at gun point, while you go to prison. Then some pedos will get your children. I'm not making this up.

Damn. America is truly the last bastion of freedom in the entire world, huh? Shame that it's currently going to Hell in a handbasket.

It's the natural consequence of ignoring genetic differences and pretending that everybody is equal in potential. It's not that they didn't try to bring the dumb kids up to the level of the smart ones, it's that they failed and refused to accept it.

You know, the more I discuss and study politics the more I realize everything can pretty much be boiled down to A) Jews are subversive and B) Niggers are unfit for western society.

Well, whether you are a man or a woman, premarital sex is degenerate and a sin. I don't care if you think women like it.

what I am saying is not my opinion, its how women are, and they dont care what you think either, they will continue to be sluts projecting that is what they think men like.

Yes, everything has always been like this and always will be. Sure. That's not complete bullshit at all

No man anywhere even remotely has numbers close to some of these thots. The top 20% wishes it and they still don't have their bodies not even close.

Depends. Honestly know some real man whores who would have sex with anything that has a heartbeat...probably something without one too.

I used to work as a bartender at a locally famous place. You get to see people at their worst in that job. We had one girl, a regular, that had the most insane body count ever. Reasonably cute girl. Funny. But she had fucked every single male employee before I got hired. Even the beamers in the kitchen. Sometimes two coworkers a night. Such a garbage hoe that other bartenders would tell her"show me your pussy" and she would. Come to find out she was married the whole time.

Thots are probably triple digits graduations college I would think.

We should slut shame men too.

it's true. I knew an athlete I went to school with who had three baby mamas by the time he graduated. His low standards bit him hard.

I recently had a disappointing conversation with my mother about a character on a TV show. She was a notorious slut (the character, not my mom), and that was always portrayed as "you do you" / girl power. That always bothered me a little about the show, but whatever.

However, eventually there came a storyline where she falls in love with a guy and totally commits herself to him, and insists that he do the same. Then he cheats on her. It's not okay that he did that, but in the show it's an earth-shattering "how dare he" betrayal, resulting in a bunch of the "good guys" beating the shit out of the cheater on the girl's behalf. It's the season finale. Punishing a guy for cheating on a girl whose entire personality and life strategy for years has been to be a thot.

I found that annoying and said so to my mom. I said you don't get to be a proud slut for years then just decide you want to flip the switch and be a monogamous good girl with all the attendant respect. My mom's response was quite simply "yeah you can."

My mom is very conservative. She's heavily on board with the notion that all these women focusing on careers and sex instead of families and commitment are steering themselves into a late life filled with misery and bitterness. She gets it, to a large degree. But in this conversation, it's like none of that mattered. If a girl is nice, she can always just recant the past and forget all consequences, the end. From what I know about her, I don't understand how my mother can think this way, but apparently she does.

Don't expect any deep thoughts about society from women. The entire sex is inherently solipsistic. That doesn't mean they won't ever see things from a man's perspective, it means they can't. Assume that all women behave like clinical psychopaths and you'll never be surprised.

How do you have time to waste watching this?

I believe it is possible for someone to change. But it's incredibly hypocritical for someone who has authentically changed to then be super judgmental of others who struggle with the exact same thing. All TV shows are complete garbage now.

Ever wonder how single women in their late 20s or early 30s put their academic and career accomplishments in their profile?

They think men choose women the same as how women choose men.

A handsome millionaire will take a young, pretty, demure, and affectionate girl that didn't go to college over some 32 year old professional woman any day of the week IF he can.

A lot of women embrace feminist slut culture in their teens and early 20's and as a result are completely clueless about the sexual marketplace until 30 starts breathing down their back. Slut shaming is a crucial tool to prevent that from happening.

Women are more or less their surroundings, there is no accounting for them beyond creating a better context so that it is less desirable to be what is appropriately labelled in both Bix Nood and Ebonic vernacular, a "stank ass hoe". Of all the chimp speak that exists, this is a term that I readily thank them for. Punctual, degrading, and highly appropriate.

I would say shame, shame, shame - but until that wonderful ethnostate in the middle of nowhere comes along where people are actually happy and grateful towards their dopamine receptors, you'll just have to hope for a woman who brings out the best in you and meet her very early.

It's true. Gotta get a good woman young. If you wait till they're in their late 20's you're only going to get dirty sluts, divorced jaded bitches, single moms, or extreme intraverts.

If you're a man, then no. You can date a woman in her early 20s. If you're a woman then you better find a decent Christian man immediately or you'll be destined to turn into a dirty slut. Good luck.

Only a pussy blames jews for what women want, what women are doing once they have complete social and political power. Don't be a pussy. I know your christcuck religion puts women on a pedestal which you bow before as your cuck nature demands. However, please exercise your pea-sized cuck brain and recognize women's true nature. Even your sacred text spells this out explicitly. How stupid are you?

In what kind of shithole do you live that you have never met a decent woman?

I love that my meme has triggered you so deeply.

ya a lot of people like sex. But that doesn't mean acting like a slut is good for anyone. Overindulgence is for weak and insecure bitches.

Agreed. Wouldn't say Christianity puts women on a pedestal, though.